The Sudoku game board is a 9 x 9 grid of squares. A new game starts with a partially completed game board.

The object of the game is to fill in the remaining squares using the rules below to guide you. The game is finished when all squares have the correct number in them.

To solve the puzzle, every square in the grid has to contain a single number between 1 and 9 while adhering to the following three rules: 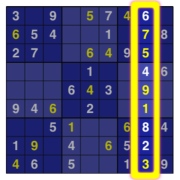 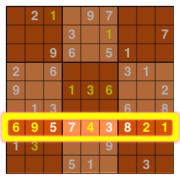 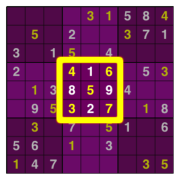 To fill a square with a number, tap on the square to select it; you will see it is highlighted. Then tap on your number of choice from the row of Number Selection Buttons located below the game board.

Color Sudoku and Sudoku Scrapbook are variations to the number game where the numbers are replaced by colors or pictures. The rules and strategies are the same.