Also called Klondike or Patience, Solitaire is a single player game played with a standard 52-card deck of playing cards (without the jokers). 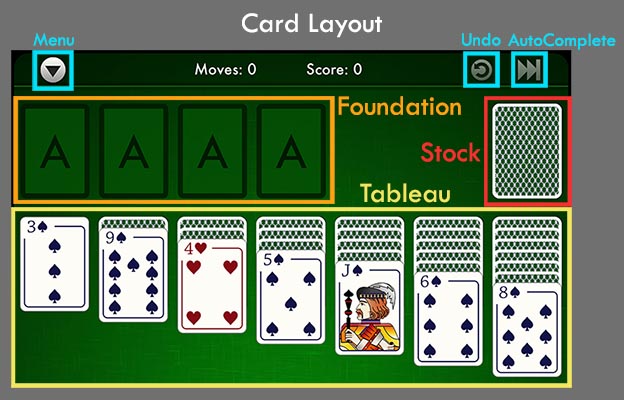 The objective of the game is to build up four foundations; one for each suit, in ascending order from Ace to King.

If the movement of a tableau card exposes a face down card, then it is turned face up. When a tableau column is completely cleared out, the space may be filled only by a King or a packed column headed by a King. When no more moves are available from the tableau, the top three cards from the stock are dealt face up, without upsetting their order, to a single waste pile. The top exposed card of the waste pile is always available for play to the foundations or tableau. When the stock has been exhausted, the waste pile is picked up and turned over to form a new stock and the game continues. This procedure is continued until the game eventually blocks or is won.

A variation of the game allows a single card (Draw 1) to be dealt to the waste pile instead of three cards (Draw 3). This can be configured in the deal section of the game Settings which you can find in the menu.